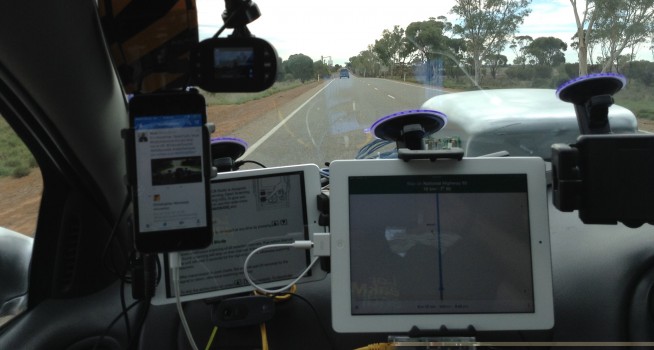 So yesterday was quite a day, with our body clocks set to Sydney “kid-wake-up” time and many things on our minds awaking at 5am didn’t actually feel that bad. Dave took to the computer to wrap up a million things still running in Sydney and I mentally planned the day ahead.

Hitting the road at 7 to get out to see the car before the gates even opened at Prixcar, clearly showed our keenness to get stuff sorted and focus on everything that needed to be done..

Quite a day ahead as it turned out, stitching it all together like two monkeys with a bunch of bananas, Dave and I were in our element. I should try to attach another photo to this but we spent the best part of the day in a Bunnings car park at an intersection, JayCar on one corner and believe it or not a new fried chicken ‘restaurant’ I was quite excited to try called Chicken Treat on the other. Not a patch on the colonel but good and greasy none-the-less. Pig in Sh*t I say.

Anyway, got all the tech up and running which was brilliant. So satisfying to see it all come together and reward all the hard work the guys had put into it over the past couple of months. Nice work boys!

On our drive back into Perth city we had to pull over to look into a couple of bugs, we had Ben Blanks on the line giving us tech support and the like, but reached a point with the messaging app that for some reason wasn’t working. Ben suggested remoting in to see if he could look at the Rasberry Pie which he was able to do via Dave’s laptop. At the same time Dave was on FaceTime being projected up onto the Friday meeting screen in the office. Not sure if you are getting this but I’ll go on. So Dave is going through his iPad into the wifi network in the car back to Sydney, being pushed through Apple TV onto the screen at work while Benny has remoted in via the same connection, through the router and into the Pi. It was a moment that in my mind captured Dave as far away as he could be and Benny as integrated into the car as the car itself. To top things off, Benny was on the speaker phone which felt really weirdly like a doctor giving you a prostate check whist asking you how your week was. Quite bizarre, so I’ll leave you with that thought.

The rest of the day went to plan we had the pre race briefing, met our teams we were all pretty cool and headed off for some dinner and to get a good nights rest.

Tomorrow (today) was another day and we both looked forward to it in anticipation.