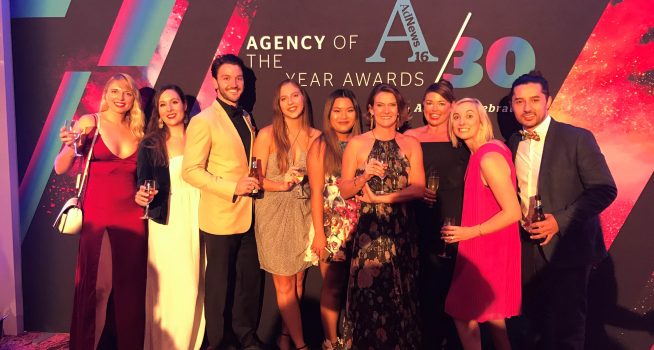 History Will Be Kind Scores Another Gong!

By Deepend on June 29, 2017 in Uncategorized tagged with admin-featured, awards, history will be kind with No Comments

History Will Be Kind has continued its rapid ascent by winning the AdNews PR Agency of the Year.

Days short of its third birthday, History Will Be Kind (HWBK) last week added the AdNews honour to the CommsCon Mid-size PR agency of the Year award it took out last year.

EJ Granleese, History Will Be Kind managing partner said that the AdNews award had come off the back off the metrics from a number of large, successful campaigns, adding that the agency’s “multi-channel Content Remix Lab and significant growth really caught their attention too”.

“In the past year alone, we have been part of the team that successfully launched the $1.5 billion International Convention Centre Sydney (ICC Sydney), developed a compelling 360-degree strategy for the DVD and Blu-Ray launch of X-Men Apocalypse for Twentieth Century Fox Home Entertainment, and propelled Cheapflights.com.au into the top 10 Australian travel sites, to name a few,” she said.

Granleese identified the $1.5 billion launch of International Convention Centre Sydney as a “huge point of pride”, working with organisation for more than two-years as an extension to their in-house team.

“As one of the state’s largest infrastructure projects, building awareness and generating buzz amongst a raft of stakeholders was key to encouraging critical event bookings. To do this, we created a strategically phased programme to reconfigure the venue’s integrated communications ecosystem across channels”, she said.

The result was more than 1,2000 media hits, a 4.9 per cent average engagement rate on its social content, the mobilisation of over 100 stakeholders, and 35,000 people having read the HWBK co-created, magazine Sydney Views.

“This campaign contributed to 500 plus events bookings for the venue, set to bring $5 billion benefit to NSW over the next 25 years.”

Celebrating its third birthday this month, Granleese said the agency had no intention of slowing down and planned to grow with “numerous new products and services”.
“If 2016 showed we were ‘one to watch’, our aim for 2017 is that it will be our ‘game changer’ year,” she said.

This featured originally seen on http://influencing.com/au/story/history-will-be-kind-scores-another-gong-1