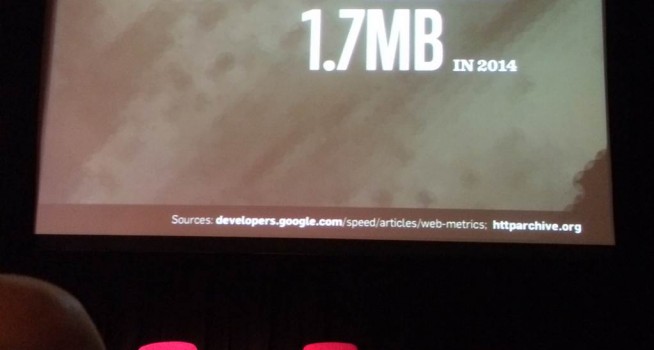 Designers down-under staying ahead of the curve

By now we know that we have to embrace the fact that the Web is fragmented, with multiple devices, different screen resolutions, various input-types and input devices, and many browser(s) versions. How to best embrace it remains a challenge, and it was quite liberating to discover that most people (and speakers) in the room at the Respond Conference in Sydney, are facing similar challenges. The solution cannot solely be found in the technology and code, but more so in the process and team communication around RDW.

Jason Grigsby opened the day and talked about ‘Mobile First Responsive Web Design’. RDW is mostly considered from a layout perspective, often not from a performance and interaction point of view. Performance was mentioned by multiple speakers during the day, agreeably an issue with web design. Statistics show that the average size of a website in 2009 was 320 kb. This month, the average site is 1.7 Mb. Top ecommerce websites are 22% slower than last year, even though we know slow sites make users abandon carts. Now, it’d be easy to say that that’s an indication that it’s not possible to design ‘fast’ loading sites with responsive. Not true. Nothing inherent about RDW, makes websites big.

The responsive image dilemma was another returning subject. Images make up a large part of websites (54% of webpage content are images) and the way they are handled influences performance. Two approaches can be taken to images: resolution switching (load different sizes of the same image based on device) or art direction (crop images contextually).

Content was discussed by Sally Bagshaw, who addressed the slow process of content. Not just the creation of content, but also the delivery of content and then the process of fitting that content into a model that was created for it. She quoted Cleve Gibbon saying “no model survives first contact with real content”, no matter when in the process the real content is introduced to the model. She suggests that one way to smoothen the content ‘quandary’ is to focus on the top 10% copy first, and get a copywriter on it. She also described how content often inherited instructions from the time when people weren’t as familiar with the web, such as: fill in the form below, or click on the button on the left.

Andrew Fisher is an interaction analyst and talked about measuring different actions based on the context of a user, and then using that to analyse and optimise a user’s experience for different devices. Instead of just measuring time spent on a page, it might be desirable to measure scrolling behaviour, i.e. total distance scrolled, scroll back distance, scroll back to top, or rate of scrolling.

Ethan Marcotte, half philosopher, half developer, spoke beautifully about what the vision for RDW is moving forward. He talked about the ‘health of the web’ looking at users in emerging markets that access the web on ‘old’ devices with slow internet access. These users are no longer confined to Asia and Africa. They will soon be ‘our’ users too, and we need to consider them and design for reach.

Like John Allsopp, I feel fortunate to work in the digital space during a time in which we are (still) shaping the ‘new’ medium, that is the Web.