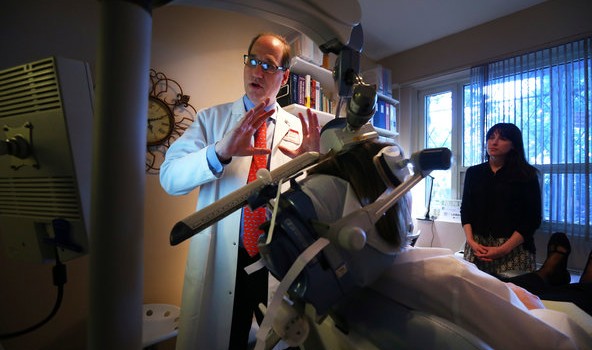 By The Editor on July 2, 2013 in Health & Wellbeing, Innovation tagged with depression, health with No Comments

The below article via The New York Times delves into a new therapy for depression called transcranial magnetic stimulation, or TMS.  The therapy involves a large magnet being pushed against the left side of the patient’s head, creating an electrical current in the surface of the brain that “‘resets’ the patient’s mood regulatory system”.

No pain or spasms are caused and patients are able to watch TV or read a book during the therapy session, as long as they do not fall asleep.

It’s an intriguing innovation with no negative long-term side effects, which is why it is gaining the attention of those taking anti-depressant drugs.

Martha Rhodes experienced her first bout of depression at 13. By her late 50s, she had taken just about every antidepressant there is, including Zoloft, Lexapro and Paxil — which did the trick for many years, but had side effects — then Effexor, Lamictal, Seroquel and Abilify.

After a suicide attempt in 2009, she tried something radically different: transcranial magnetic stimulation, or TMS, a treatment in which magnetic pulses are used to stimulate parts of the brain believed to be involved in mood regulation. Unlike electroconvulsive or shock therapy, which is also used to treat stubborn depression, TMS does not generally produceseizures.

Every day, she spent just over half an hour in a chair with a powerful magnet affixed to the front left side of her head. After four weeks, “I woke up and something was different,” said Mrs. Rhodes, who wrote a book, “3,000 Pulses Later” describing the treatment. “I felt lighter. I didn’t wake up in the morning and wish I were dead.”

For Mrs. Rhodes, 63, a former advertising executive in Danbury, Conn., TMS treatment was transformative, and she no longer needsantidepressants. But there are still many questions about just how many severely depressed patients respond to TMS, which requires daily office visits for several weeks, costs thousands of dollars and is often not covered by insurance.

For the therapy, patients sit in a doctor’s office with a large magnet pressed to the left side of their heads. The idea is that a pulsed magnetic field, similar to that used in M.R.I.’s, creates an electrical current in the surface of the brain that “resets” the patient’s mood regulatory system.

TMS is approved specifically for patients whose depression does not respond to antidepressants or who cannot tolerate the drugs’ side effects, which include weight gain and loss of sex drive. Many of these patients are desperate for alternative treatments, but it’s not certain that TMS can provide the help they need.

“While it’s fairly clear that TMS is effective in some percentage of patients with major depressive disorder, it’s still not very easy to know in advance who those patients are,” said Dr. Steven J. Zalcman, the head of the clinical neuroscience research branch of the National Institute of Mental Health.

The American Psychiatric Association’s practice guidelines say that TMS confers “relatively small to moderate benefits,” and the results of clinical trials have been decidedly mixed. “The glass is half full or half empty, depending on where you’re coming from,” said Dr. Mark S. George, a professor at the Medical University of South Carolina in Charleston.

Dr. George was an investigator in the first independent, randomized trial of repetitive TMS to treat resistant depression. While that study found thatnearly three times as many patients went into remission after TMS treatment, compared with those receiving a placebo, the absolute numbers were still small: Only 14 percent of treated patients recovered, compared with 5 percent in the placebo group.

A newer variation of the treatment, deep TMS, developed by an Israeli company called Brainsway and approved by the Food and Drug Administration this year, brought a higher response rate in a randomized trial: 30 percent of 233 patients in the trial achieved remission, compared with 14.5 percent of the control group.

The device targets deeper regions of the brain, like the nucleus accumbens, which plays a pivotal role in the reward circuit of the brain, company officials say.

In industry-financed studies that allowed subjects to continue their antidepressant medications while undergoing TMS treatment, which experts say is a more likely situation in the real world, response rates were significantly higher than in the randomized trial conducted by Dr. George. A recent study, as yet unpublished and also financed by equipment makers, that followed patients for a year reported the treatment had a lasting effect, with nearly half the patients maintaining improvement for 12 months.

An advantage of TMS treatment is that it is not invasive and, unlike medication, appears to have few side effects, just occasional discomfort or mild pain in the scalp at the site of the treatment, or headaches. Few patients drop out of treatment because of the pain, however.

Long-term effects are not known, but TMS does not take a toll on memory and cognition, as electroconvulsive therapy can. In rare cases it may cause seizures.

In a demonstration of TMS at the Manhattan offices of Dr. Alan Manevitz, the patient, a 55-year-old woman who asked not to be identified to preserve her privacy, sat in a chair while a small, heavy magnet held by a mechanical arm was positioned over the prefrontal cortex of the brain.

There was no anesthesia or sedation. The patient was allowed to read or watch TV, just not fall asleep. Nodding off seems unlikely, however, since the treatment makes a strident woodpecker-like rat-a-tat sound that lasts for four seconds, followed by 26 seconds of silence before resuming. A daily session lasts about 37 minutes.

The patient, who has had a full course of TMS and is now receiving occasional treatments, said the therapy had pulled her out of severe long-term depression.