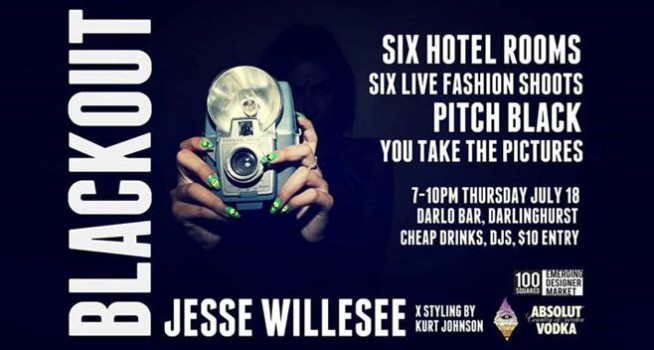 Jesse Willesse’s events have become an institution with a dedicated following over the last few years in Sydney. An original concept every time, great venues, a savvy crowd and of course, the art.

Let’s talk about the art.

A combination of pop culture, social issues and audience engagement, Jesse’s style of art is immersive and addictive, leaving his audience hanging in anticipation of what his next brainchild may involve.

Successfully sparking debates of ‘What exactly is art?’ with exhibitions rife with controversy, Jesse is no stranger in dealing with the aftereffects of his shows, whether it’s having to face police trying to shut a show down (22 Girls Smoking Weed), front page headlines (his Passout exhibition allowed the audience to interact with ‘passed out’ models) and having to deal with connoisseurs debating on whether his art show actually represents contemporary art or is just mocking the reasons why people visit gallery openings (Product Placement).

A photograph from the Passout exhibition

Jesse’s annual photography event (previously known as Seven Hundred Photos and Flash/Mob) is held at the abandoned hotel rooms of the Darlo Bar and draws huge crowds of photographers, enthusiasts, artists, models and musicians who line up to immerse themselves within the walls and photograph the live interactive art and fashion installations complete with professionally styled models which are staged inside the rooms.

The date to watch out for is Thursday, the 18th of July.

This year, there’s a major twist: the whole fashion show will be held in pitch-blackness, with only occasional torches and camera flashes lighting the secret – and surprising – installations within the rooms. Be ready to see some unexpected chaos.

So grab your camera, whether it’s a DSLR, a phone or that instant camera you bought for that festival and come to Darlo Bar, Darlinghurst at 7pm. If you don’t want to take any photos, just come and watch the action unfold.

One tip: arrive early. This will be a popular show.