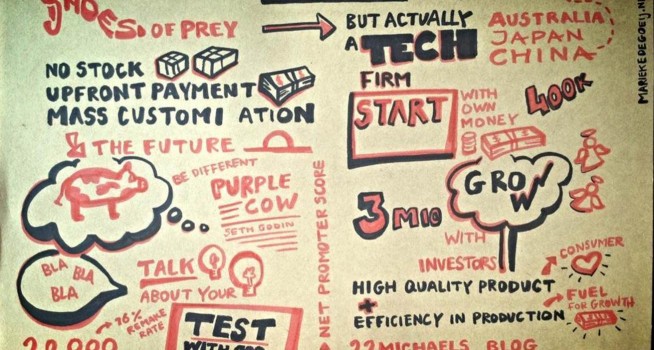 The Purple Cow & His Shoes

By Eva Muller on August 30, 2013 in Innovation, Music & Fashion, Retail tagged with fashion, startup with No Comments

Michael Fox is the co-founder of Shoes of Prey, one of Sydney’s most talked about startups. Shoes of Prey is a website where you can design your own (women’s) shoes, which are then hand-made and shipped to you wherever you are in the world. At Startup Grind in Sydney, Michael Fox, a very well-dressed sympathetic man, talked about the startup strategy, future directions and lessons learned along the way.

Michael studied Commerce and Law, found out he wasn’t a very good lawyer (but finished his appretiship anyway), fell in love with retail working at Supercheap Auto Group and at Google found out he liked the digital marketing space. He also realised that the best employer in the world still wasn’t perfect. So if he wanted something better, he’d have to create it himself.

The journey started when at uni, Michael met his current business partners Jodie Fox and Mike Knapp. They had full time jobs when they started expirmenting in the startup space with 2 ideas. The difference between those 2 ideas, and Shoes of Prey, is the way their friends reacted. Their travel app was not really talked about at all, and the dating app for handsome people only, was mainly good for a laugh. With Shoes of Prey on the other hand, the reaction was different. It was going to be their purple cow.

Going forward with the idea, Michael saw that the shoe-business-model was broken. Pre-season ordering based on forecasting; in bulk only; and (human) capital paid upfront by the shoe brand. This means that you probably sell less of the popular products because you didn’t order more, and you have to bring the price down on the ones you don’t sell, because you ordered heaps and they are now taking up costly space in your warehouse. And on top of that, for the customer, buying shoes is not a very creative experience.

With shoes of Prey, the idea was to order and produce shoes, on demand. So one at a time. Everybody said they were crazy. And knowing what they know now, they were. It’s an extremely tough space. But they went into it naively, and they did it – shoes are now produced in China, on demand, each pair uniquely designed.

Shoes of Prey is obviously in the fashion space if you look at the end product. But when you look at the rest of it – the shoe-designer tool, e-commerce platform, tracking of components, translating an order into Chinese for production – then they are essentially a tech-startup. Hence, most of their investors are also in the tech space.

Did they ever think about leaving Australia? They did, especially looking at the chances of getting angel investors while based in Sydney. But their advantage is being close to China, and the startup space has evolved quite a bit since their start in 2009. To advance this positive change even further, Michael believes it is key to look at education. Only 400 Australian graduate in Computer Science each year. That’s very little considering the fact that you need software engineers to start any business these days. A good example is set by Vietnam, where Computer Science is taught in schools, resulting in the fact that by year 11, they know enough to pass Google’s interview process for engineers.

Shoes of Prey looked at Zappos’ model when they created their Customer Happiness team. Returns can be done with no questions asked (luckily they don’t have a 35% return rate like Zappo, as they can’t actually put the returned shoe ‘back on the shelve’). Customer satisfaction is measured through the Net Promotor Score. At three points in the customer journey, users are asked ‘How likely are you to recommend our company/product/service to your friends and colleagues?’, making them either a promoter or a detractor. They are also asked what the single biggest things is that they would like to see improved. This is then used as important input for the business and improvements, and is tracked over time. Delivery time is currently 2,5 weeks (compared to 5 weeks when they started) and the packaging is said to be amazing in terms of the user (unpacking) experience (hurray for the purple cow, people talk about it).

The beauty of it all, to me, is the partnership. When Mike Knapp went ahead and quit his job at Google to start working on the platform full-time, Jodie and Michael used their salaries to support him. They knew they were going to startup something sooner or later, so started saving money to be able to their first round of angel investments, themselves. Go team go!