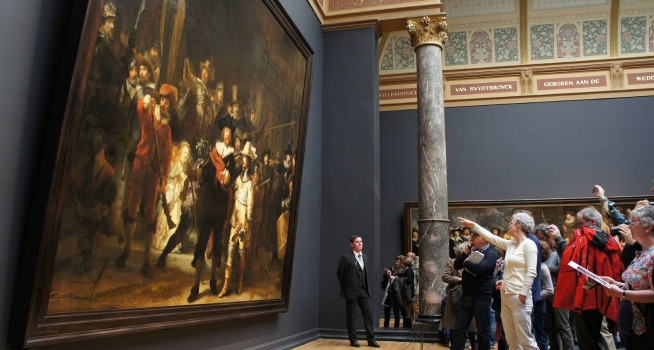 By Elizabeth Croger on May 7, 2014 in Opinion, Tourism tagged with museums, tourism with No Comments

Museums were once places of formality and silence, where exibits were intended to be looked at from afar.

In the digital age, many great galleries, libraries, achives and museums of the world have been breaking this mould, transforming their offering and bringing their exhibitions to life.

In 2012 the Rijksmuseum created Rijksstudio, an online collection of some of the world’s greatest masterpieces, and invited the public to share work, download images, order prints and curate their own collections.

By sharing the ownership of their digital collection they have created a new dynamic for appreciating art, making it accessible to a wide audience in an environment that facilitates collectivity and collaboration.

To date, nearly 150,000 people have registered and interacted with Rijksstudio online – creating a substantial subscriber base for marketing events and merchandise.

This Antwep gallery has embraced Apple’s iBeacon technology as a way of giving the classical art of Rubens a new lease on life. iBeacon sensors installed throughout the museum deliver location based interactions to visitors with the corresponsing app, encouraging them to discover new details in classic works of art – such as a hidden drawing beneath layers of paint.

It will also provide invaluable data on the foot traffic through the gallery, allowing the gallery to track levels of interest in different pieces in a tangible way.

Released last year, the National Library of Australia app ‘Forte’ is a vast digital collection of sheet music from Australia’s history, ranging from the early 1800s to the 1950s. Users can browse the collection by composer or date, then create and share their own favourite lists via social media.

‘Forte’ was developed using an open data set of sheet music made available for the 2011 LibraryHack competition, which is designed to encourage the innovative re-use of library data and content.

As with the Rijksmuseum, by sharing access to their collection online, the NLA has facilitated engagement with their material and created an open environment for appreciating Australia’s musical history. They have also encouraged shared ownership of these resources, not only by making the data set readily available in the first place, but by allowing users to curate their own collections of music through the app itself.

This icon of human history and culture has long been a champion of digital technology and first launched their Samsung Digital Discovery Centre in 2009. In late 2013, the British Museum took digital interaction to the next level with A Gift for Athena – an augmented reality app designed to help children engage with the museum’s ancient Greek exhbits in the Parthenon gallery.

The app uses image recognition to identiy artefacts, reveal information and provide a new perspective on gallery pieces. Puzzles and games are used as keys to unlock additional information with a simple interface that keeps the app easy-to-use for the target age group (7-11 year olds).

The museum has already committed to expanding its digital offering, with more innovative in-depth activites such as 3D printing and animation workshops planned for the future.

All of the examples above share a commitment to encouraging digital interaction and allowing people to engage up close and first hand, rather than from a polite distance. In the case of Rijksmuseum and the National Library of Australia, opening up access to their collections beyond their physical walls has allowed them to create an environment of shared ownership, subverting the dynamic of the traditional museum and transforming the visitor experience.