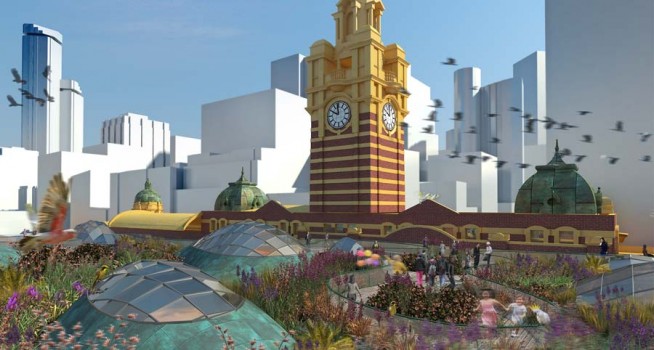 Flinders St Station in Melbourne has been open since 1854, serving the entire metropolitan train network and covering two whole city blocks, with over 110,000 commuters and 1500 trains passing through every day. The main building stands as one of Melbourne’s cultural icons, and is responsible for the saying, ‘I’ll meet you under the clocks’- these clocks are above the main entrance and date back to the 1860s.

Such an iconic train station has naturally gone through more than a few refurbishments however as Melbourne grows, sometimes a cosmetic restoration simply is not enough to propel the station into the 21st century. So the Victorian Government launched a $1 million dollar international design competition which challenged participants to reinvent, rejuvenate and restore Flinders St Station.

From 118 submissions, 6 finalists have been selected and the overall winner will be decided based on the judge’s opinions as well as people’s votes. The six finalists showcase a refreshing variety of architectural approaches and addressing the criteria through creating 3D renderings of their vision of the station. Although I could discuss my personal favourites, I do not want to state a bias – instead I strongly encourage you to visit: http://vote.majorprojects.vic.gov.au/ and vote for your winning choice by August the 5th.

However, I will mention that I do prefer the entries which focus on staying as true to the historic construction of the station while expanding it to cater for the increased needs of a growing population.

Enjoy having a look at the entries!