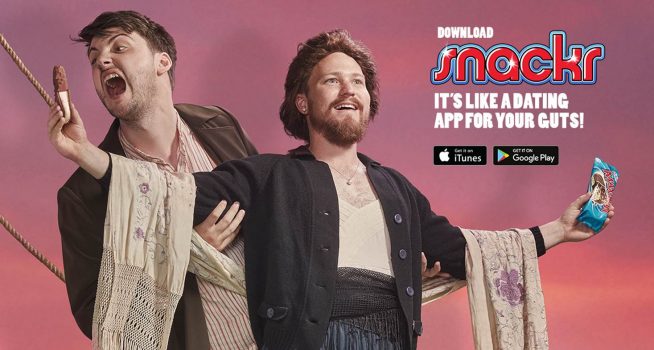 By Cabrini Broderick on March 29, 2017 in Uncategorized tagged with deepend with No Comments

Leading independent digital agency Deepend and Peters Ice Cream have launched a cross-channel campaign for Maxibon, including a bespoke app to encourage ‘Maxibonding’ between mates.

In a three-pronged approach, the full campaign consists of nation-wide outdoor creative, unique digital assets including a tailored Snapchat lens, and a bespoke app. The campaign is underpinned by a carefully targeted social media strategy that will roll out until early April.

Luke Wallis, Content Director at Deepend, said the campaign targets the brand’s core demographic of 18-24 year old fun-loving Aussie blokes who enjoy shared snacking experiences. The “Never Smash Alone” campaign demonstrates how the SNACKR app brings two mates together. Their love of sharing a Maxibon transports them through a series of Maxibonding moments, parodying some of the most infamous rom com scenes.

“Maxibon has been in market for 17 years and top five in its category. We wanted to make sure this work did it justice by taking the experience of shared snacking a step beyond basic ATL advertising. Building on the brand’s iconic ‘smash a Bon’ slogan, the new app, SNACKR, matches Facebook friends to help ensure consumers will ‘never smash alone’,” he said.

Alicia Munday, Head of Marketing of Peters Ice Cream, said the company is thrilled with the outcome of this campaign, which comes as part of a longstanding partnership with Deepend.

“Maxibon has long been recognised as a catalyst for bringing mates together. This creative not only resonates well with our core fans, the clever app design takes customer participation to a new level by actively driving fans together, and enabling easier purchase by highlighting the nearest outlet offering the best Maxibon 2-for-1 deal and turning users into legends”.

The SNACKR app is available for download from the Apple store and Google Play.