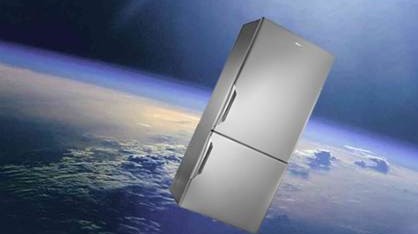 Shrinking The Distance Between Idea and Execution

By Michael Goldstein on July 12, 2012 in Innovation tagged with arduino, design, digital., innovation, phygital, strategy with No Comments

The world is accelerating, and the distance between idea and execution is dramatically shrinking in terms of time, cost, and complexity. Someday soon we will be able to move near-instantaneously from idea to execution. While this may seem a little Star Trek-ish, already technologies like 3D printers and processes like rapid prototyping are chipping away at the divide between idea and execution, between the digital and physical.

We wanted to know just how far off are we from having our very own Star Trek Replicator (one Earl Grey tea, please), so we took one concept from idea to working prototype as quickly as we could. This is how we created the Fridge of Tomorrow.

There is plenty of innovation happening in the appliance industry, but most of it seems a little directionless. Samsung has a touch screen on their fridge, and LG wants to connect all of their appliances wirelessly, but we had a hunch that there was a bigger opportunity here. We were wondering what the Fridge of Tomorrow would look like. The opportunity is to create a fridge that moves past the novelty of smart tech, like the touch screen on the Samsung fridge, and into a world where smart tech actually makes a fridge better.

To make our fridge better, we looked at the implicit nature of how people interact with their appliances. At a high-level, a fridge’s job is to improve the relationship between people and their food. It used to be that the very act of refrigeration was advanced enough, but today there are myriad other ways to improve that relationship. Some of the first things we envisioned the Fridge of Tomorrow would be able to do included generating shopping list, creating recipes based on the ingredients inside, help us eat better, or let us know when the milk was running low.

Developing the Fridge of Tomorrow required understanding and overcoming key hurdles appliance manufacturers face: things like cost, uncertainty of consumer demand, and the risk of going to market and moving out of the comfort zone of existing technology.

Creating a fridge with every potential feature would be too expensive, but we pinpointed the foundational feature from which all the other ideas would flow: the key to making the Fridge of Tomorrow was making it self-aware – allowing the fridge to know what is inside of it.

We created three user experiences we wanted to prototype. The first flow demonstrates our most valuable idea of making the fridge self-aware. The others play with other data points and user interactions.

The next step involved translating these strategic ideas and user experiences into executable designs. As strategists, our focus is conceptualizing the value of human interaction and the directionality of communication – not programming and physically building technology. To help round out our team, we partnered withAdam Lassy, a developer and artist specializing in physical computing. Adam grounded us in the reality of what could be done easily and quickly to test our user experiences. He also brought a skilled, tactical perspective to prototyping which fleshed out our user experiences to include technology-specific solutions such as how often the scale in the fridge pinged our server, and how long the fridge should wait before it lets you know you’re out of milk.

Then we started the actual coding and soldering that turned our idea into a physical reality. In less than two weeks, we had a working proof of concept. Two weeks later and we had the bugs ironed out. It’s certainly not pretty, but our prototype works – It has become a living piece of strategy that uses current technology to hint at a future where every fridge knows what’s inside of it. Here’s how it works.

By scanning food as it moves in and out of the fridge, we can create a complete database of everything inside and how long it has been there. From here, we can build a recipe recommendation engine based on what is in the fridge, automatically generated shopping lists, recommend food to try based on what you like, and even connect the database to a grocery delivery service to have the fridge automatically order what it is missing.

Weighing the milk in our fridge means we know not only what is inside, but also how much of something is in the fridge. Our smart fridge lets users know when they are running low on milk and should buy more.

Finally, we tested having outside data impact some of the fridge functions. UsingFitbit, a wireless-enabled pedometer, we transformed our fridge into a dieting commitment device by adding a lock which would only unlock after burning a specific amount of calories (at first we set the Calorie goal to 1,000 – this proved to be a little ambitious). We leveraged FitBit’s API to connect our personal fitness data to the fridge.


LESSONS FOR NEXT TIME

With our experiment in rapid prototyping a resounding success – start to finish in a single month, we’ve pulled out a couple of insights to improve the process of building proof of concepts in the future.

1. Test the Foundation: Remember you are trying to prove and test a concept,which means the whole idea doesn’t have to be built. Building an entire concept is expensive and slow; to remedy this problem with execution is why we started this prototyping process to begin with! Build the functionality that is the foundation for proving your theory. This way you can test it out before investing more time and money.

2. Fake It: Some functionality is easy to fake or mockup. We originally were only going to ping an existing database of Grocery UPCs for Flow #1. However, we found it easier and quicker to create our own database and leave integration with the universal database for the next iteration of the fridge. If it’s expensive to build and you can fake it in some way, do it. Just make sure that the prototype still tests what you’re after.

3. Be Flexible: If something is not working, or is taking too long, don’t be afraid to work around it or scrap an idea. Again, the entire point of this process is to test an idea cheaply, quickly and easily.