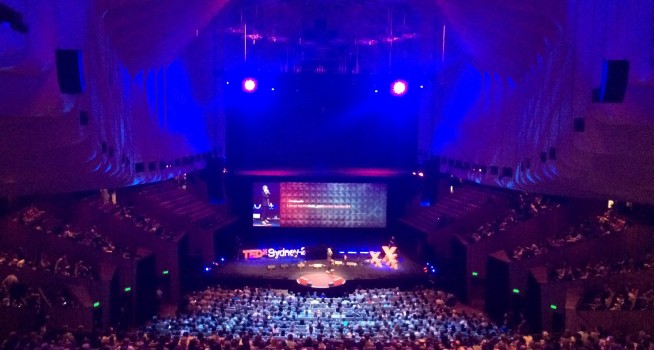 A few Deepend’ers were selected to attend TEDx Sydney 2014 in the Opera House this weekend. Starting at 7am with a breakfast ‘ideation’ session about how to get Australia higher on the Innovation Index (nr 9 in 2013) , the day forbode to be packed with captivating stories and stupefying performances.

The sessions were grouped into 4 topics, namely ‘Passage’, ‘Blood’, ‘Enhance’ and ‘Rethink’. The videos have not been released just yet, but in a meanwhile you can view the full archive of the day here, or through the app. To give you an idea of what the 2300 invitees were in for, I’ll you give you my top speaker for each topic:

Adam Alter – researches behavioural economics, marketing and psychology of judgment and decision-making. He found that certain ‘traits’ of people, such as generousity, honesty and open-mindedness, can be influenced quite simply. For instance generousity, specifically towards donating. He explained how people are more attracted by the letters that form their initials. To get as many people as possible to donate towards a cyclone relief fund then, you have to ensure that you name a cyclone accordingly. So if most people in Australia have names starting with J, and you name the cyclone starting with a J, you get a lot more people to donate. Easy. Just call a cyclone Obama, or Bill Gates – Adam joked.

Mary Jerram – retired state coroner of NSW talked about the difference between vengeance and justice. She believed vengeance can not be achieved through law. For those people affected by a death or tragedy, closure is not really given through a sentence or imprisonment – grief goes on and on but through her job Mary believed to help the loved ones left behind by providing justice – not vengeance.

Oliver Percovich – founder of Skatistan told the extrodinary story about how he found a loop-hole in the regime banning women in Afghanistan from participating in any sports. Skateboarding was too novel to have any rules and regulations yet. Oliver has succeeded in setting up the award-winning NGO combining skateboarding with educational outcomes.

In Kabul, Skateistan’s participants come from all of Afghanistan’s diverse ethnic and socioeconomic backgrounds, and include 40% female students, hundreds of streetworking children, and youth with disabilities. In the skateparks, the students themselves decide what they want to learn – connecting them with a safe space and opportunities for them to develop the skills that they consider important, such as peace.

Mark Major – a lighting architect, spoke about the unique relaitonship between light and architecture in our cities. He spoke about the polution and waste that our cities produce through artificial lighting once the sun goes down. Shopfronts, neon signs and unneccesarily lit streets and buildings, degrade the values of light (or of no light rather), such as intimicay and concealment. Feeling safe and secure, does not have to be lessened, when we are more reasonable when using light.