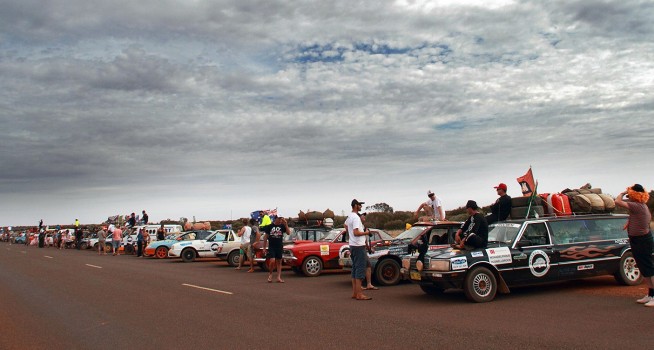 The Sh*tbox Rally: Innovation is a Journey not a Destination

By Matt Griffin on September 30, 2014 in Shitbox rally tagged with admin-featured, cancer council, innovation, shitbox rally with No Comments

Introduction: The journey through the Kimberley

Imagine, if you can, a 4,000km journey through one of the most remote areas of Australia – the Kimberley, in the far north-west of our vast country.

We were driving an ageing vehicle but we’ve packed it with the latest, cutting-edge mobile technology – turning it into a fully connected, interactive car.

I remember driving up behind a car towing a caravan on that trip through the Kimberley. This lone caravan had a small sticker on the back with the old cliché: “Life is a journey not a destination”.

It was not until I was putting this post on Innovation together that I realised how relevant that sticker was. Innovation is the same as life: it’s a journey, not a destination.

We learnt many lessons from our outback adventure but this is the one that sticks in my mind the most.

Innovation requires trial and error – and sometimes a lot of it. So if you don’t see innovation as a journey, you could be in for a long, frustrating ride.

Think about any product of a feature war you have witnessed: toothbrushes that are easier to hold, shavers with more blades, the development that has gone into today’s pushbikes or 18 different versions of Nespresso you can buy. The focus on product innovation has been immense for almost 100 years.

Maybe it’s because products are tangible you can feel them, touch them, they have substance – that we are led to believe that innovation is the endpoint defined by the product feature or benefit. We idealise the perfection of the completed product.

Or maybe it’s because innovation has strong roots in marketing, where the end product holds a dominate stake – where the traditional formula for success comprises of only “three Ps”: product, price and place.

But that’s a very simplified view. We all know the world has changed. Business models have been disrupted, customer experience is now a huge competitive advantage, partnerships are more highly leveraged and technology is often a big part of a solution.

Innovation has spread its wings really far and we know it is no longer just relegated to the products we produce.

Other Types of Innovation

Think of a service innovation like Uber, changing the way we book and pay for taxis… a new profit model innovation like AirBnB, making a big part of its revenue from selling insurance to both renters and landlords… or, a market innovation the likes of what Tesla are doing by allowing anyone to use their patents in order to help grow the electric car market.

There are countless examples of these in all areas of business and the desire and satisfaction of bringing these innovations to life are immense.

But whether it’s a product, a service, a market innovation or any other type for that matter the process of achieving these is long and arduous journey.

But what about our journey through the outback?

We were actually participating in an event called the Sh*tbox Rally.

It may sound like a joke, but it’s actually the largest DIY fundraising event on the Australian Cancer Council’s calendar. It raises over $1.5 million dollars annually for cancer research.

It’s a rally, not a race, but participants need to drive over 4,000km across some of the country’s most arduous roads.

And as the name Sh*tbox Rally suggests, we’re not talking about the latest luxury cars here.

Each car has to be purchased and made roadworthy for a total cost of no more $1,000.

This year around 250 cars participated, travelling the huge distance on sealed and dirt roads, through river crossings, bushfires and past loads of wildlife – it was an epic journey in its own right.

Where it all began

For my co-driver, Dave, and I, the journey of innovation began much earlier – in Sydney, months before the start of the rally.

To give you some context – Dave and I run complementary digital agencies: one focused specifically on mobile technologies and the other offering a broad range of digital and innovation services.

Together, we have 80 incredibly smart strategists, designers and technologists – with some directly affected by cancer.

Our firms aren’t totally full of geeks but we’re all pretty involved in tech.

So it will come as no surprise that we believe that the internet is vital in helping to research and treat cancer more effectively.

–  With the incredible focus on personal technology used for remotely collecting patient data,
–  available electronic medical records that provide access to this data,
–  and add the overall changing view from mass to personal treatment of health issues

– the healthcare industry is on the brink of a massive revolution.

If you throw in numerous other breakthroughs including the relatively recent sequencing of the human genome – all these healthcare advances are coming together, with the internet at its centre.

The future fight against cancer (and other diseases) is a connected one – and it involves us all.

But it’s not all Doom and Gloom

With this quite serious resolve it didn’t take long for us to come up with our not-so-serious team name and slogan:

“The Internets – Rally the Future against Cancer”. And we were off!

We put together a core team of 10 – and an extended team of probably three times that – to create our fully connected, interactive car.

We wanted to turn our 14-year-old Holden Commodore – one of Australia’s classic makes – into a virtual vehicle. So people could come on board through digital technology and experience the rally, just as Dave and I would.

We wanted telematics, broadband and satellite connectivity. We wanted car tracking, image recording of the trip and publishing – and, of course, the obligatory web cams.

We also wanted social reach across Twitter, Facebook, Instagram, Live Stream and a website. This site would not only help drive donations in the lead up, but it would also become the “Dashboard” for the live experience of David and I on the road.

One last key piece of the puzzle was to connect a Spotify playlist that we’d created and even the car’s air-conditioning unit. So website users could “hack the radio” and turn off the air-conditioning – for a price, of course.

With the website hooked up to a payment gateway, users could donate extra for the ‘pleasure’ of seeing our discomfort.

We had loads of fun doing it. And here’s how it turned out.

But the reality of this dream was a little bit different if I’m being completely honest. The project required an immense amount of work, with the team spending many late (but enjoyable) nights and weekends.

We had to cobble together raspberry PIs, satellite connections, a short-string messaging protocol, a local car share technology called GoGet, and more.

With this assortment of products, systems, services and technologies, it was no wonder that we encountered some pretty major roadblocks along the way.   Here’s just a few.

It seems obvious now with the benefit of hindsight but the GoGet system is a non-perenial system meaning that it stores data locally and uploads it when there is available bandwidth. In the case of the car, which was coming in and out broadband range all the time, data like the speed, location and driver status could only be posted when the car was in mobile broadband range.

So, late in the piece, we had to move these functions to a perennial system – the raspberry pis and satellite connection, so that the car was always online and could be tracked by viewers at all times.

The second major issue was with the car’s telemetry – its direct connection to the car’s internal system was not possible due to the model of car that we’d chosen.

This was a huge blow, as we had originally wanted to extract all sorts of data from the car to add to the overall user experience.

But we solved the problem to some degree with various workarounds. For example, we switched from publishing the engine’s temperature to the computer’s temperature, which was more easily detected.

On the road, power or lack thereof, was something we just didn’t account for. Whilst we had a duel battery system with an inverter for a 240v system, the power drain was immense. As a result many parts of the systems just failed at the most in opportune times.

Lastly because our telco’s actual coverage in those remote areas fell well short of its published coverage. I’m sure you can all relate to that. We were left more often than not feeling like we were on the dark side of the moon and having to contend with virtually no updates to the site content.

Leaving users to the site with images like these for literally days.

Were we disappointed? Yes, of course we were. We’d spent so much time on this project that nothing but the “full monty” was going to cut it.

We wanted the innovation destination in all its glory. We wanted a fully connected, interactive car… that would take us 4,000km on some of Australia’s worst roads… communicating with low-orbit satellites and mobile broadband using computers the size of credit cards… in one of the most remote parts of the country… and yes, on a budget of less than $1,000.

But were we wrong to ask for that much in the first place?

So sitting back in Darwin – at the top end of Australia – with a beer in our hands after completing the rally, we asked ourselves the question: Was it a success?

It’s easy to lose sight of your goals when you charge headlong into a project – and innovating is no exception.

You get so focused on what you are doing – so clear in your resolve to get to that endpoint – that you forget to acknowledge your success along the way. You forget to reward yourself for the journey as well as the destination.

Did we achieve all our goals – reach our ultimate ‘destination’? No, we didn’t.

But we did create a connected car that engaged an audience of supporters. We empowered a team of innovators to create something they never had before.

The car was a finalist for best car in the rally and we were in the top five fundraisers, raising over $20,000 for cancer research.

So I ask you, was the project a success?

Conclusion: Getting out of your comfort zone

What I’d like to leave you with is hopefully some inspiration to get out of your comfort zone and innovate. Build a team and create. Do something you’ve never done before, because that’s what innovation is.

If you only achieve half of your goals, that’s better than not starting in the first place.

Because there’s always the next iteration or the next project to improve on.

And Remember… Innovation is the journey not the destination.