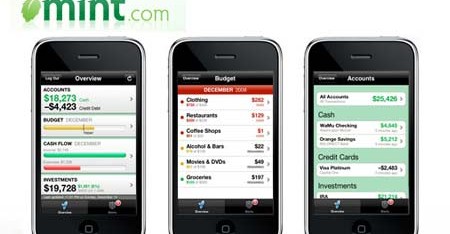 Your phone might be smart. But is it smart enough to replace your financial adviser?

As consumers ditch chequebooks and spreadsheets for services that let them pay bills and monitor their net worth online, a growing number of companies are betting they will choose to receive financial advice not only on their computers but also, increasingly, on their mobile devices.

Finovate, a conference series that showcases new financial applications, expects nearly 200 companies to present at its events this year—nearly 10 times as many as in 2007. The company, which holds confabs in New York, San Francisco and Europe, will host its first-ever event in Asia in November.

The new web and mobile apps all pull data from the "cloud," that grand repository of storage in the sky. Taken together, the apps hold the potential to disrupt the personal-finance industry by offering new ways to help consumers stick to budgets, stay on top of their portfolios and reduce investment-management fees.

At the same time, critics warn, the apps also could pose security or privacy risks, and, by helping people automate their personal-finance decisions, could foster complacency.

Their goal: to fund the next Mint.com, which launched five years ago and now boasts more than 9 million users. Its free service, which allows users to aggregate bank and investment information in one place through its website and mobile app (on iPhone and Android) and provides advice on ways to save, took direct aim at desktop personal-finance software such as Intuit’s Quicken and Microsoft Money. In 2009, Intuit bought Mint for $170 million. Microsoft discontinued Money that same year.

The newer services aim to replace traditional financial advisers, or to expand on Mint and similar offerings by tapping into the latest research in behavioral finance to ensure you stick to your spending plans.

For example, HelloWallet (apps for iPhone and Android), which debuted last year and now has 350,000 participants, compares a user’s spending and savings habits to those of people of similar ages and income levels. The company claims its average participant has increased his or her monthly contribution to savings by 80%.

The services don’t always work as smoothly as advertised. Ginger Dean, 30 years old, of Washington, says many of the 10 personal-finance services she has used have experienced occasional glitches that prevent her from immediately updating her account information. When it comes to bill payments, she says, "I feel a lot safer with my bank."

What’s more, most of the apps require you to divulge account user names and passwords to function. The services say they have bank-like security measures to protect the info, but that isn’t completely reassuring to some users. A company called Rudder, once a competitor to Mint, in 2009 accidentally sent financial information on more than 700 of its customers to other users. It closed down in 2010.

The new tools also present the "potential for people to make speedy, misguided decisions, especially when you give them speedy devices," warns Mark Schwanhausser, senior analyst at Javelin Strategy & Research in Pleasanton, Calif., who nonetheless thinks many apps can help consumers. To make sure that its users remain engaged in the budgeting process, for example, HelloWallet requires them to categorize some of their expenditures manually, such as those they pay for by check.

"Automation is incredibly powerful because it reduces the amount of work users have to do to track their finances," says Chief Executive and founder Matthew Fellowes. "But it also takes away the control from people. We don’t automate everything in order to keep them engaged at a basic level."

Still, the march toward technology is inevitable. With that in mind, here are some new services that are pushing online budgeting and investing capabilities in new directions:

Thanks to the widespread use of credit and debit cards, which currently finance about 60% of consumers’ transactions, according to Javelin, these services are able to break down spending into categories, such as utilities and groceries. Some even track how much a user spends at specific stores or on specific items.

But the next generation of services also incorporates techniques designed to prod users to change their savings and investing habits.

HelloWallet asks users to flag purchases they regret. Using GPS technology, it tracks the locations of people using its applications on mobile phones and tablets. When a user enters, say, Brooks Brothers or Ann Taylor, the software can automatically retrieve his or her budget and past spending on clothes.

When someone is close to a spending limit or has expressed a desire to cut expenditures, "we will send a message that says, ‘If you save that money instead of spending it, here’s how much it can grow to by the time your daughter is ready for college,"’ says Mr. Fellowes, the CEO.

For Adam Zuckerman, 32, simply seeing the $40 to 50 a week he spent on coffee was enough to prompt a change. "I completely cut myself off for a whole month," says the Washington resident. The attorney now allows himself three or four cups of store-bought coffee each week. Otherwise, he says, "I try to drink the free stuff at work."

When someone saves more than anticipated, the service calculates whether it is optimal to use the money to pay down debt or raise contributions to a 401(k) or other savings account. A downside: the service costs $8.95 a month.

Other services use different methods to motivate users to save. Stickk.com, which is now web-only but expects to release an app by year-end, uses more aggressive motivational techniques to help people stick with their goals. Some 30% of the site’s more than 150,000 users elect to pay a financial penalty—often, in the form of a donation to a friend or even to an organization whose views they oppose—in the event they fall short of their goals. Users also can invite others to track their progress.

Susannah Blumenstock, 35, signed up a month ago with the goal of paying down half of her $10,000 in credit-card debt. Ever since, the Berkeley, Calif., restaurant manager has exceeded her goal of paying off $180 of debt per week between now and year-end. In any week in which she falls short, Stickk.com will levy a penalty she selected—a $20 transfer from her bank account to that of a friend.

"It’s an extra incentive for me to do what I know I need to do," she says.

Like Mint or MoneyCenter, San Francisco-based SigFig collects your investing account information into one place. But SigFig, which will release apps for Android and the iPhone later this month, takes it further, analyzing the data to show your asset allocation and whether you could save on fees by switching to different mutual funds.

After connecting your investment accounts, SigFig will tell you if there are similar mutual funds with lower expense ratios—a major driver of overall performance. If you use a full-service broker, it also will tell you how reasonable your broker’s fees are when compared with competitors.

It also can analyze your holdings to show a complete asset allocation and other portfolio characteristics, like its geographic breakdown and volatility, that otherwise would require a financial planner or visits to multiple brokerage accounts to calculate. A drawback: SigFig can’t always analyze the unique funds that appear in some 401(k)s.

Personal Capital (app for iPhone), of Redwood City, Calif., tries to combine the automated approach with a human touch. In addition to the free account aggregation and automated analysis, the company will connect you with one of its on-staff financial advisers. The advisers charge an annual fee of 0.95% for the first $250,000 in assets, which includes trading costs and fund expenses, and slightly less for assets above that.

That is a bit less than what traditional financial advisers charge. The National Association of Personal Financial Advisors estimates that fee-only planners charge about 1% for assets under $1 million and 0.75% on assets above that, on top of the other fees.

Personal Capital’s planners can’t perform all of the functions of full-service planners, like estate planning, and the company’s plan to combine technology with human service could make the process less personal.

The downside: If one of the firm’s staff financial advisers were to leave, says Chief Executive Bill Harris, a customer might have to choose between working with someone new at Personal Capital or jumping to a new firm.

Users can get the recommended allocation free after filling out a short questionnaire that attempts to calculate both their emotional and goal-based risk tolerance on Wealthfront’s website (there isn’t a mobile app yet). For a 50-year old with average risk tolerance, it recommended a portfolio of about 40% bonds, 47% stocks and the rest in commodities and real estate—fairly standard advice for such an investor.

The costs come in if you decide to let the service do the work of investing and rebalancing for you. The company manages the first $25,000 of a portfolio at no charge, not including the cost of trades, but charges 0.25% of assets annually above that threshold on top of trading costs and the fees of the underlying exchange-traded funds.

Wealthfront has a more established competitor in New York-based Betterment (app for iPhone), which launched in 2010 and now manages about $50 million, according to CEO Jon Stein.

After signing up and funding an account, you establish various goals, such as saving for retirement. Then its automated system recommends a simple stock/government bond portfolio allocation. If you think your risk tolerance is higher or lower than the recommendation, you simply move the "risk dial" and adjust the allocation accordingly.

Betterment uses low-cost exchange-traded funds from iShares and Vanguard Group, and takes a management fee of 0.15% to 0.35% on top of underlying fund fees. That makes it more expensive than if you managed the index funds yourself, but cheaper than most financial advisers.

Of course, it remains to be seen whether computer software can take the place of the emotional coaching that makes up a major component of financial advisers’ jobs.

Some investors are wading in gently. Aldo Sunaryo, 28, a software developer in Austin, Texas, opened a Betterment account early this year, which he is using to save for a wedding. Mr. Sunaryo says he likes the simplicity of setting his asset allocation, but for now is keeping most of his savings in his brokerage account, which he says lets him better customize his stocks and mutual funds.

"I like to have more control over what stocks or mutual funds I buy for my big savings," he says. "But this fits my needs for other savings well."

via The Wall Street Journal