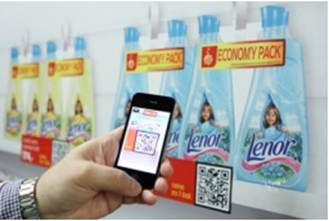 P&G Takes to the Subways to Sell Good

By The Editor on July 5, 2012 in FMCG, FMCG, Innovation, Retail tagged with FMCG, innovation, retail with No Comments

Attention shoppers: Dishwashing liquid is on sale at the far end of the subway platform.

The world’s largest marketer, Procter & Gamble, has set up virtual stores in four of the busiest subway stations in Prague, where busy consumers on their way to and from work can purchase essentials such as razors, shampoo and diapers via their mobile phones.

How does it work? Consumers capture QR codes for whichever items they’d like to purchase, and the orders are submitted to Mall.Cz (the biggest online store in the Czech Republic). Consumers then receive a message to confirm a delivery time — all while waiting for the next train.

It’s the latest example of how packaged-goods companies are angling to boost sales by offering consumers more convenient ways to shop.

P&G’s experiment appears to borrow from a concept Tesco stores pioneered in South Korea. This past summer, Korean agency Cheil Worldwide took home the Grand Prix in the media category at the Cannes International Festival of Creativity for its virtual-store idea that recreated lifelike images of store aisles in subway stations. People browsed the aisles and shopped simply by snapping pictures of products with their mobile phones. The products were later delivered to consumers’ homes. The aim was to help Homeplus — the local name for Tesco — gain market share over its larger rival, E-mart, while also helping time-strapped consumers.

The stores P&G have set up in Prague similarly place images of the products, and their prices, on oversize displays, mimicking supermarket aisles. But in P&G’s case, the shelves will be stocked almost exclusively with the company’s own products — such as Ariel detergent, Gilette Venus razors, Old Spice deodorant, Pantene shampoo and Pampers diapers. The company in an announcementFriday did note, however, that it would add a few other products, such as small electronics and toys, around Christmas to help consumers check items off their shopping lists. P&G is also guaranteeing second-day delivery of products.

It’s unclear right now whether similar experiments are being launched in other markets around the world; spokespeople were unable to comment by press time.

There appears to be a wealth of interest in the subway-shopping concept. Chinese retailer Yihodian.com also borrowed the Tesco idea out of Korea, recently installing virtual supermarkets in 15 metro stations around Shanghai.

L’Oreal USA Chief Marketing Officer Marc Speichert included a detailed case study of the virtual shopping program in a media presentation in New York earlier this month, noting that the Tesco unit used it to address a market-share shortfall and inability to find real estate to build new stores in South Korea. Questioned afterward, though, he was quick to point out that L’Oreal wasn’t involved in the South Korean program.

Mr. Speichert also noted during his talk that Walmart executives were particularly intrigued when they’d been shown the case study. Wal-Mart Stores pulled out of South Korea in 2006 after an erstwhile attempt to enter the market.

While there’s no lack of interest from marketers, just how viable subway shopping is in the U.S. remains a major question, given infrastructure issues. New York City, for example, is only just beginning to flirt with cell service in subways, with AT&T and T-Mobile subscribers on select routes beginning to receive service as of this month.