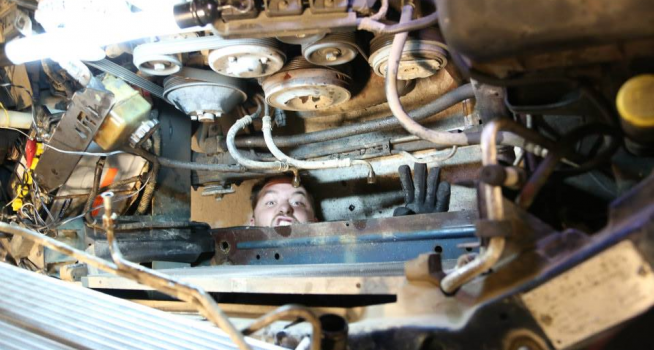 ‘Rally The Future Against Cancer’ is a joint initiative by digital and innovation consultancies Deepend and Nomad as part of the Shitbox Rally, a charity rally to raise money for the Cancer Council of NSW. Deepend and Nomad owners, Matt Griffin and David McGowan, will attempt driving 4,000km across the middle of Australia in a car (a ‘shitbox’) worth less than $1000. Both agencies and staff have joined forces to transform the ‘shitbox’ into a hyper-connected car with emerging technologies to help raise funds for the research and treatment of cancer.

A brief word from the Mechanical team…

This week saw us smash an amazing night on Wednesday getting all major repair work completed. This included:

• Replacing the radiator. (Cracked, it was never going to make it.)
• Cleaning the water hoses (Decided to replace existing hoses in the spirit of the rally rather than putting on new hoses)
• Oil change and filter replacement (No brainer)
• Replacement of the steering rack rubber boot
• Changing the drive belt (Cracked beyond belief. Would not have made it to the petrol station to fill up)
• Re-threading the steering arm bolt that Matt destroyed with a hammer. (Nice one Matt!)

Here’s the pics to prove it.